If asked where the strength of Slow Food Italy can be found, many people might assume it would be in Tuscany, Umbria – the image of Italy for thousands of British holidaymakers – or Piedmont, where the international offices of Slow Food are based, in the small town of Bra. Yet Sicily has the most Slow Food presidia products – those deemed to be of outstanding quality, derived from a long history of artisan knowledge and experience and produced locally in sustainable ways – and there are many other reasons why the Slow Food movement has grown so strongly on the island. It benefits from an exceptional natural habitat, rich in biodiversity with a unique variety of fruit and vegetables beyond the seasonal constraints of other climates, and the fact that industrial food and agriculture did not develop with the same intensity as on the mainland.

However, there are more reasons why Slow Food has become so important in Sicily. First, it has an extraordinary and varied history which maintains a presence in the knowledge of the people, the landscape and the tastes and flavours of the food. Despite its long-standing problems of political corruption and socio-economic deprivation, which often casts a destructive sense of fatalism amongst its inhabitants, there is a rich tradition of civil society and associationism on the island. There is also a vibrant intellectual heritage which finds its way into its life and culture in unexpected ways. When I was researching the Slow Food Story, I drew mainly on my experiences in the nebrodi mountains, the Aeolian island of Salina, and the cities of Messina and Catania and their surroundings. The province of Agrigento, noted for the stunning Valle dei Templi, Greek temples from the fifth century BC, offers another different example of the rich mix of history and terrain.

A slow week, or, more accurately, four days, in the province of Agrigento, started with an event organised by Fondo Per L’Ambiente Italiano (FAI), the Italian equivalent of the National Trust. This was a very special event, which climaxed in a concert featuring the music of Ennio Morricone. FAI had set up a long-term landscape and renovation project to reconstruct the ancient Kolymbetra Garden, found in the small valley between the Dioscuri and Vulcan temples. Previously a reservoir, in recent centuries the garden had grown to include ancient, exotic fruit trees and a unique natural habitat, but which had been abandoned in recent times. FAI’s contribution in restoring the Kolymbetra Garden (which was re-opened to the public in 2001), brought together botanists, archaeologists, zoologists and others, and was crucial in preserving a unique environmental history. The concert, held on the first evening, was held against the background of an ancient olive tree.

An ancient terrain, rich in biodiversity, is an ideal backdrop to a Slow Food event. This is the land, too, of Luigi Pirandello, a native of Agrigento who knew the importance of a ‘fruitful soil’ – the imagination – in the development of the creative instincts of artists and writers. In nearby Raculmuto, where he was born and lived for most of his life, Leonardo Sciascia, a sharp critic of Italy’s political class and the cultural hold of the mafia on Sicilian society, was driven by his understanding of the complexities of his land. Food, along with other aspects of local art and culture, remained crucial to Sciascia’s Sicilian identity as a writer. Sicilian food is important too in the work of Andrea Camilleri, one of Italy’s greatest contemporary writers, who originates from Porto Empedocle, between Agrigento and where I was staying in Realmonte. His popular Sicilian detective Inspector Montalbano is also a gastronome as well as being a critic of the abuses of power on the island.

Once again I was well looked after in Sicily by Giuseppe Taibi, a lawyer with a passion for British culture and a sharp insight into the causes of Italy’s political inertia. He has had made the wise decision to opt out of party politics for the meantime and extend his involvement with a variety of associations in civil society. In addition to FAI, another of his local associations is the Giallanardo Sea Club, and together with its president, Giuseppe Fanara, he organised a very original gathering for my book on the beach at Giallanardo, in conjunction with Agrigento Slow Food; a beautiful and unique Sicilian setting, which was followed by a splendid meal in Siculiana, where I was able to taste Spaghetti ai Ricci, just yards from where they were caught.

Once more I experienced extraordinary Sicilian hospitality, which is second to none. Based at Maria Deleo’s wonderful Villa Deleo, on the seafront of Realmonte, near Scala dei Turchi (the Turkish Steps), each day started with Giovanna’s own Granita di Mandorle, Cannoli and other specialities on the terrace overlooking the sea, where Camilleri in the past has sat, smoking, contemplating and talking. The Sicilian contribution to Slow Food remains profound and compelling. 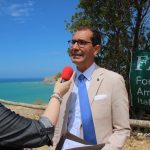 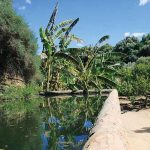